November – Sounding the Alarm on Vaping 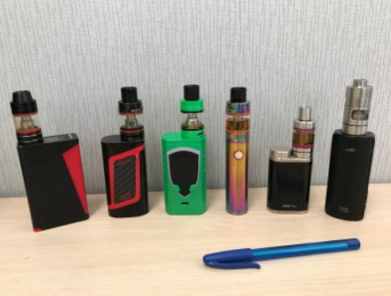 Just in case you thought we were winning the war against tobacco, think again. Recently released results from the Canadian Tobacco, Alcohol and Drugs Survey (CTADS) shows that current smoking rates for Canadians aged 15 years and over have crept up to 15.1% in 2017 from a low of 13.0% in 2015.

But wait, it’s about to get worse. Recent changes to Ontario’s legislation now allow the vaping industry to fan the flames of nicotine addiction and it is already impacting our youth.

In 2008, the promotion and marketing of cigarettes was banned in recognition that these tobacco industry tactics put youth at risk. Fast forward to 2018 and now, lurking next to the chips, candy and slushies, one can find e-cigarette promotions. None of this is lost on the tobacco industry, which has invested heavily in vaping as a way to reach a whole new generation of potential customers.  Brightly coloured devices with names like “Vype” or “JUUL” are making it cool to inhale or “vape”.

The changes in promotion are thanks to Ontario’s Smoke Free Ontario Act (SFOA), which now harmonizes laws governing medicinal cannabis, recreational cannabis, conventional cigarettes, and e-cigarettes. By falling back on existing and poorly worded federal legislation, it has unleashed the mass media promotion of vaping products. Take a walk or a drive and you will witness the big and bold freestanding brand promotions, including posters and video displays, now located inside and outside retail locations like gas bars and convenience stores. It is all legal – and it’s not okay.

“This generation of kids can’t be the guinea pigs for vaping products,” said Dr. Robert Schwartz, Director of the Ontario Tobacco Research Unit (OTRU) at the University of Toronto in the days leading up to the SFOA changes. “Vaping by non-smoking youth in Ontario is already very substantial, with a 46%increase among grade 10-12 youth in two years. Displaying vaping products in convenience stores, particularly those with flavours such as Frosty Sprinkles, S’mores and Swedish Candy only leads to greater use.”

Health experts conclude that allowing retail vaping displays and promotion will put thousands of children and youth at risk of nicotine addiction. This highly addictive stimulant works on the same part of the brain like other drugs like cocaine and opioids and causes a rush or high within 20 seconds of use. It floods the body with adrenaline, causing elevations in blood pressure, heart rate and respirations. Often, it is the first drug used by people who later develop alcohol and other substance use problems. Adolescent brains are particularly at risk from nicotine. Kids are already so addicted that they are vaping in between classes at Peterborough school washrooms and setting off fire alarms.

With smoking, generally a cigarette delivers a 1 milligram dose of nicotine. With vaping, pods of flavoured liquid for the JUUL device can contain the same dose of nicotine as found in a package of cigarettes.

We are on the threshold of an epidemic of new nicotine addiction. What is needed is an outcry from parents across this community and province to demand better protection for their children from the vaping industry. A recent study of youth and young adults across Canada where 60% were regular vapers found that 82% were using nicotine and almost 6 in 10 had no intention of quitting. Vapers had higher rates of tobacco smoking, alcohol and cannabis use than non-vapers and more than half perceived themselves to be addicted. Social exposure to vaping was high in this population with 8 out of 10 non-vapers reporting seeing someone vape in the past seven days.

Vaping can be a powerful tool in the harm reduction tool box for smokers but in the wrong hands, it is an initiator of early and powerful nicotine addiction. About 20% of the vapers in the study above were also smoking tobacco.

Let’s all sound the alarm – the current unfettered promotion of vaping will lead to increased tobacco and substance use in our next generation of adults unless we do something now to turn it around.